How hard could it be, right? You take your awesome ideas, and put them on paper, you send them off to the publisher, and BLAMMO! You’re an author! For years, I’ve had people listening to my stories and reading things I’ve written, only to tell me, “You should write a book! You’re a natural writer! And for the most part, I agree with them, simply because it’s just what I’ve always done. Since I was old enough to hold my first pencil, I would write my “stories” and read nonsensical scribblings to my mother, my grandparents, and anyone else who’d listen. As I grew older, and learned to read and write, I was doing almost nothing but reading or writing whenever I had free time. It’s just who I am. I’m a writer.

But getting an entire book written isn’t that simple. An essay, is one thing. It’s no big deal. Assign me an essay about something – anything – and I can give you as many pages as you need, and get at least a B on it. No big deal. But a book… that’s another story. Writing a book requires you to take a very personal part of who you are, and show it to the world one letter at a time, one word at a time, one idea at a time. And every single word is, in itself, an idea of it’s own. For example; I can be moving along in the process of writing my prose, and suddenly the wheels come to a screeching halt, because I get hung up on what word I want to use to accurately convey the idea of the scene. You’d think that would be easy, right? It’s not. Every descriptive word has it’s own ability to evoke an emotion, and if you use the wrong word, the sentence, paragraph… heck, the whole darn page won’t make sense! And it’s all because of one little word. Sometimes I overthink it.

But it’s not just that. When you write an essay, you have some sort of topic that needs researching, then you decide on your argument, and build your essay around that. Easy-peasy, lemon-squeezy! A book that is in the fiction genre is created out of nothing, and made into something. Sometimes that nothing can be something-based, and you will see situations you recognize from real life. Nevertheless, fiction is still the building of something which does not exist, into something which does, and it has to make so much sense that you – the reader – believes it’s real… word-by-word… letter-by-letter. That’s hard.

In my particular case, I am writing a fantasy fiction, so there are very few things from the real world, and many things from the fantasy world, which I am building as I go. Every creature, every person, every situation, and conversation, completely non-existent until I put them on paper. An entire world created from absolutely nothing but an idea. Not only do you have to believe what I’m telling you – or hopefully showing you – but you also have to be able to see it in your minds eye, even though it does not exist in reality, and you have no idea what it is, because you’ve never seen it before. Tough job, right?

So I told you all that to tell you this…

Lately, I’ve had a rough time finishing – yes, you read that right… finishing… my book, which is now 9 days past the deadline. The climax is gearing up, things are happening, people are interacting, and there’s just all this crazy drama, which is all great, but I’ve been having a tough time getting more than a paragraph or two done in a day… sometimes a week… for about the past 6 weeks. It’s all because of that real-life stuff happening and distracting the daylights out of me. It’s been so tough, I’ve even thought about giving up and putting the book away for good. Maybe starting something else, and forgetting about this one. Maybe forgetting all about trying to to it in the first place. I even managed to talk myself into believing that I couldn’t do it, and maybe I wasn’t a writer after all, even though I’d been writing all this time, and had an almost complete manuscript sitting on my desk, just waiting for me to finish it.

And then it it me – Thomas A. Edison once said, “Many of life’s failures are people who did not realize how close they were to success when they gave up.” Well I… am not a failure, and I’ve never given up on anything in my life. I’m darn sure not gonna start quitting now! I am *this close* to the finish line, aka the end of the book, and I will have successfully created a whole big something out of nothing. So I made a decision; I’m not going to let me, talk me out of my victory. I’m not going to be the person who gives up just before her breakthrough. Today, I got my typewriter and sat down, making the decision to write a full page, single spaced, non-formatted, literally line after line of word after word, until I had a least one filled 8.5″x 11″ page written. And ya know what? I did it. And it was pretty good!

So my dear friends… if you are struggling, and things seem like they just aren’t going to work out, and you just want to give up, remember me and my book. One of these days… hopefully sooner rather than later… you’re going to see that book on the shelf of your local book store and library. When you do, I hope if nothing else, it inspires you to keep going, and don’t give up. You may be closer than you think. 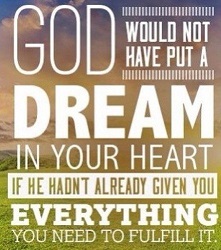 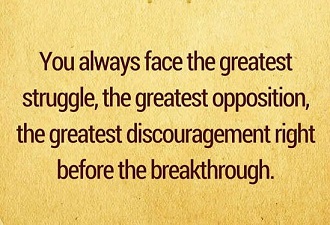